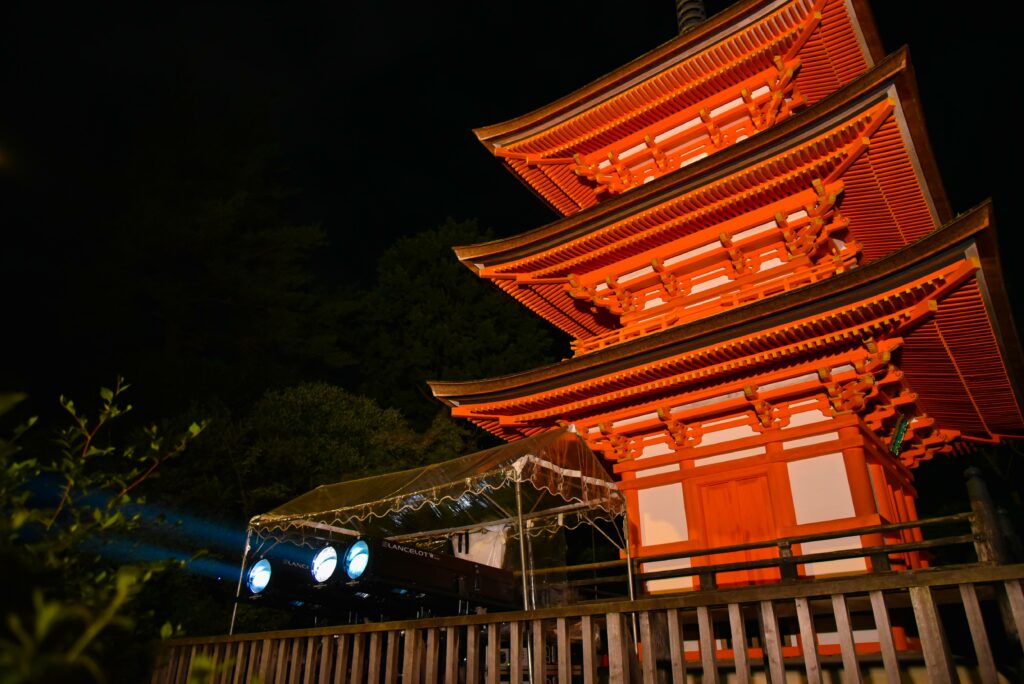 Built in 1633, Kiyomizu is a UNESCO World Heritage Site consisting of several Buddhist temples located in the foothills of Mount Otowa in Japan’s Kyoto prefecture.

Shortlisted as one of the New Seven Wonders of the World in 2007, Kiyomizu’s main building is famous for its unique 36m wide stage, supported by many wooden columns, which juts out over the hillside and to hover spectacularly 13m (43 feet) above the valley. Artists standing on the stage cannot see an audience in front of them, but instead look out over a beautiful tree-filled valley.

It was against this setting that Italian vocal trio, Il Volo, performed a special charity concert on 5 August 2022 in aid of Wedu Global (www.weduglobal.org), an organisation which supports the development of women in leadership roles around the world.

The concert was filmed in preparation for a worldwide premiere, in front of an invited VIP audience seated in the smaller Okunoin Temple located 50m to the left of the main stage.

Three RJ Lancelot followspots were set up in the three-storey Koyasu Pagoda located an incredible 180m away from the main stage, from where they projected onto the roof of the Kiyomizu stage. The initial plan had been to illuminate the artists and orchestra, but with the Dalis fixtures producing more than enough light for this task, it was decided to change the function of the Lancelots to illuminate the roof which had been newly restored in 2020 for the Tokyo Olympics. 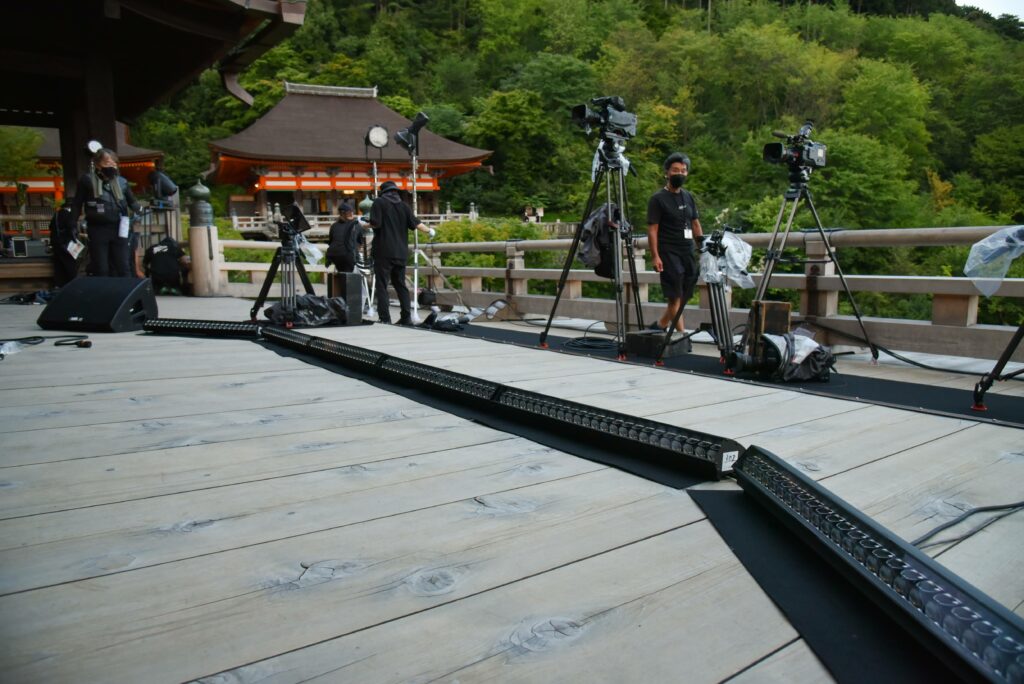 “Lancelot was the only solution to light the roof of Kiyomizu Temple’s main stage,” says Michio Tsuchiya of Sogo Butai, the lighting supplier for the event. “Projecting over such long distances requires subtle and delicate adjustments of the followspot in every plane. Just a little difference in the angle at the fixture makes a huge difference over a 180m throw distance, but it’s something we were able to achieve with Lancelot as the stands and the followspot itself are so sturdy and stable and allow for such fine-tuning.”

Six Dalis 862 Footlights were placed in a horseshoe shape at the front of the stage and used to light Il Volo members from front, while ten Dalis 861 Washlight units were rigged overhead and used as top light for the orchestra.  Inside the temple’s inner sanctuary, fifteen Dalis 860 cyclorama lights were used for very subtle illumination of the background of this holy place which is normally kept hidden, away from brighter light. “We were able to adjust these Dalis fixtures to make it dark enough to respect their sanctuary and at the same time not render it a complete black out on camera,” says Kentaro Tokuhiro of Sogo Butai.

The Sogo Butai team had to consider a number of logistical challenges during set up and rehearsal times. Not only was the historic site under strict restrictions with regard to protecting its structures and surfaces, but it is a must-see tourist destination, so all rigging, focusing and rehearsals had to take place between 6.30pm and 6am when the site was closed to tourists, with all equipment struck and reinstalled outside public opening times. In addition to this, the site lived up to its name meaning ‘pure water’ with torrential rain in the days leading up to the performance. 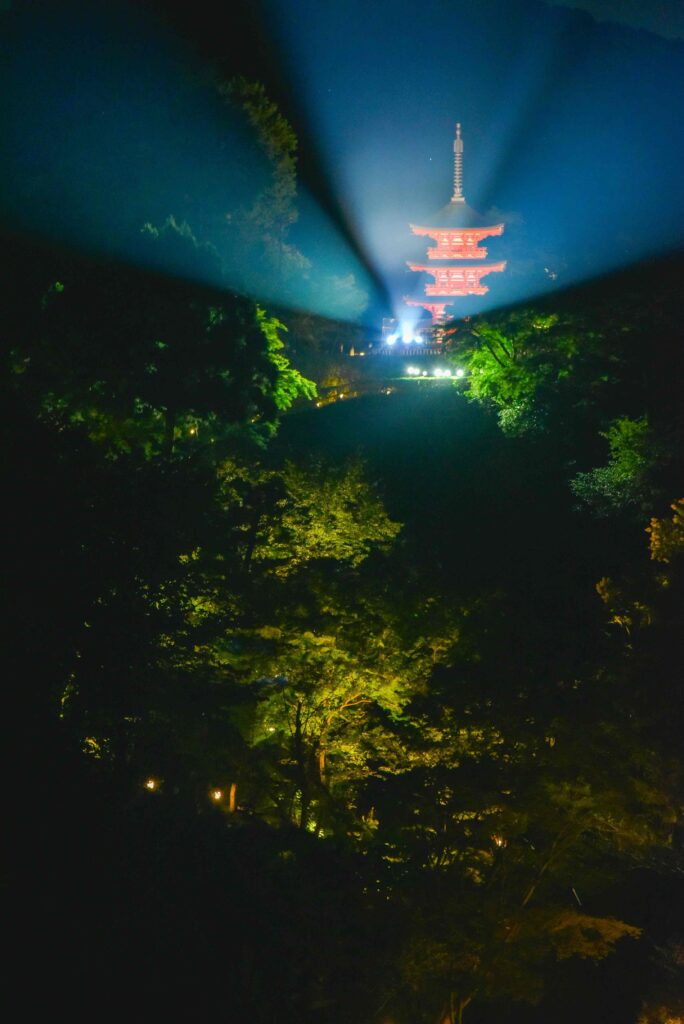 “Dalis Footlights proved the best and only solution to light the three performers in the open air without any light from above,” states Yukiteru Hayashi of Sogo Butai. “The fixtures were easy to cover up during the rain and easy to handle, install and de-rig during the many set ups and strikes. Best of all, the adjustable colour temperature was stunning for allowing quick adjustments for the cameras in such situations, even in the rain.

“Luckily the rain stopped for the day of the filming and Il Volo and the members of the orchestra performed perfectly, marking the first time in Kiyomizu Temple’s history that a full concert by a foreign artist has been filmed.”

The Robert Juliat Lancelot and Dalis fixtures were supplied to the Kiyomizu Temple by Sogo Butai, Robert Juliat’s exclusive distributor for Japan